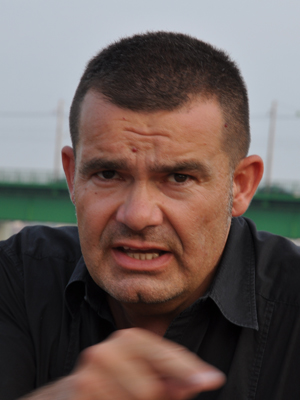 How did you develop an interest in Staro sajmište?

That is a very important place, not only for Belgrade, Serbia and South-East Europe, but also, I believe, for Europe as a whole. Therefore, it is a place that must be preserved in any circumstances. As to the ways of doing that, I’m not an expert. However, the most important thing is to avoid commercialization. Naturally, no one has had an idea to say: “The old city of Rome and the Colosseum are just ancient ruins, all that could be removed and a business centre built instead”. This place must be viewed in the same light. The events that took place at Staro sajmište must not fade into oblivion.

The site is in central Belgrade, a prime location and for that very reason quite interesting for investors.

Yes, Belgrade is not the only city where such things happen. In New York, for example, after  September 11th, a discussion was underway: if something happened there and it did, building skyscrapers again should not be an option. Rather, a monument or a memorial complex should be created. In the end, commercialization won. With that in mind, the fact that nothing has happened in Belgrade yet is not such a bad thing after all. The buildings are still in a good shape. People live there and Sajmište is, in a way, still remembered. If bulldozers came now, nothing would remain.

How do you imagine Staro sajmište?

I’m not sure. Would it be better to turn the site into a kind of museum space that consequently wouldn’t be inhabited, thus becoming a museum, a place of  remembrance? Or should it be similar to what it is now? Or a mixture of both? That would potentially mean that some buildings should be converted into museum-like places and that the majority of them continue to have their present function. How can a connection be established between these two? There are experts for these issues who do not dare give their opinion publicly. Capital rules and experts are afraid that they may lose their jobs.

Many people do not know anything about this place? Is there a simple way that history could finally come to light?

Maybe simply marking the outer border of the site would help raise public awareness. Maybe the matter should be discussed with universities or a competition organized in collaboration with the Faculty of Architecture. It is important that discussions be held first because right now it is not talked about. I think the first step would be to prevent acting in haste, as a point could be reached where it is too late for everything, all because of undue haste Some time should be dedicated to launching discussions at different levels. I believe that a discussion as such would do enough to attract attention.

Do you think that drawing international attention could yield additional pressure?

I think that the level of international attention will stay the same as it is now, because the atmosphere of unscrupulous profit making is dominant at present. A wider discussion base must be established with a lot of self-initiative, because the city authorities will surely do nothing. Small active groups should be formed to draw up a project. Individual projects would, in turn, become pieces of a mosaic, making up the entire umbrella project.

The interview was conducted on  July 21st, 2010 as part of the research project A Visit to Staro Sajmište