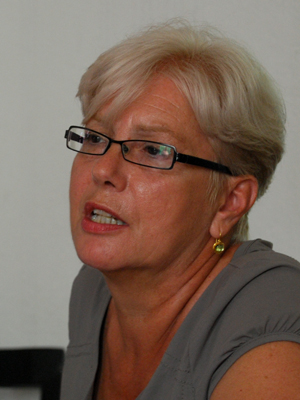 First  and foremost, we'd like to ask you about the archival material and the  existing documentation related to Sajmište. What sort of data is  available on the number of victims, survivors and the nationality of  prisoners?

The  modern complex of the Belgrade Fair exhibition grounds, built in 1937,  intended to introduce the residents of Belgrade the latest trends in  Europe, was turned into a concentration camp in 1941, whose first  inmates were Jews from Vojvodina. It is assumed that around six and a  half thousand Jewish women and children went through the Sajmište camp.  It can be said that the majority of Belgrade Jews were executed from  1941 until the summer of 1942. A German officer, head of the military  administration in Serbia wrote in his report sent to Berlin in April  1942 that Belgrade was "judenfrei", that there were no more Jews in Belgrade.

After  the period of the elimination of Jews, not just those living in  Belgrade, but all over Serbia, Sajmište became  a camp for Serbs too.  Mainly men from Kozara Mountain and also other groups of people of  different nationalities were brought there for different reasons.
According  to what we know today, around 36 thousand people went through the  Sajmište concentration camp, 13 thousand of whom were killed, namely one  in three inmates. That is a very high rate of elimination, compared to  other concentration camps in Europe.

All  victims were mostly executed in Jajinci. Sajmište is known for an  experimental procedure that would later become the machinery of death -  the gas van. Namely, a gas van named “dušegupka” was used on the inmates  of the Staro sajmište camp, primarily on the imprisoned Jews.

Working  out the number of victims is still a problem. The Germans destroyed the  documentation of Staro sajmište and removed the corpses from Jajinci.  The total number of people brought to Jajinci and executed throughout  the four years of war is estimated to have reached from 68 to 80  thousand.

Belgrade  had  four camps, two full-blown concentration camps, Sajmište and  Banjica and two detention camps, Topovske šupe and Milišićeva ciglana,  where mostly partisan fighters were held. That was a very harsh  occupation that caused many victims and represents a genuine example of  the Holocaust.

After  the liberation of the camp, in Tito's Yugoslavia, the issue of the  victims of the Staro sajmište camp seems not to have been visible  enough. Namely, the memorials that survived to the present day do not  indicate that Jews, Roma, Serbs and generally people who opposed the  occupation authorities died there, nor do they state the number of  victims. Even the Staro sajmište camp itself is not marked. What do you  make of that?

The  attitude towards execution sites and the victims in our society is a  very interesting phenomenon, from the point of view of psychology,  politics and history alike. For example, the data about the victims of  the First World War, when one in three citizens of Serbia died are  horrific. Where can you see that? Where is a monument honouring these  victims in Belgrade? The same goes for the victims of the Second World  War and the war waged in the 1990s. We don't know how many people from  Serbia lost their lives during the disintegration of Yugoslavia and the  army has never made these numbers public.  Therefore, I don't believe  that the residents of Belgrade even knew that the Holocaust happened in  Serbia.

This  is a strange attitude to human life. At the level of political elites,  this shows the extent to which human life is regarded as unimportant and  we, citizens are viewed as cannon fodder. This is a very terrifying  tradition of this region. The fact that you know nothing today about the  victims of the First World War is the result of that tradition. There  are no monuments in Belgrade, not one, even to the victims of the Second  World War. People pass concentration camps by, without ever knowing  that these were concentration camps. There is no culture of respect for  these places.

That  is why I believe it is high time we started dealing with this problem.  Not only because victims command that kind of respect, but also because  every memorial dedicated to innocent victims sends a message to future  generations that they must not find themselves in a situation where  their lives would be lost in such a way and that no one has the right to  take their lives. That would then mark the beginning of a new peace  here.

Please, could you draw a parallel with the Jasenovac camp? Why is Jasenovac so much more well-known than Staro sajmište?

Probably  because the issue of Jasenovac had to be resolved in order to make a  joint state of the two peoples, Serbs and Croats possible in the first  place. What had to be said clearly after the war was that the Fascist  ideology of the NDH (Independent State of Croatia) led to committing  genocide against the Serbian people. This is how periods of peace begin,  namely, all that happened gets clearly stated. Unfortunately , that  wasn't the case with Jews, as marking their suffering wasn't considered  to be that important.

As  far as the interest of the authorities to mark this place is concerned,  what is your opinion of the three post war periods in Sajmište –Tito’s  Yugoslavia, Milošević’s Serbia and Serbia after October 5th,  2000? Do you believe that in some periods, the initiative was stronger  than in others and if that was indeed the case, what was the reason for  that?

We  can say that the memorials were being defined, so to speak, during the  socialist period. The site in Jajinci was turned into a memorial space,  while Sajmište, namely, what remained of the former Belgrade Fair  exhibition pavilions was converted into artists’ studios. Thus, there  was an attempt to rehabilitate that whole thing in a relatively decent  way.

In  the period when tycoons rose to power, every tycoon in Belgrade had his  eye set on Sajmište. It is a very good location and they didn’t care  about the fact that it was the site of a concentration camp. As the  director of the Historical Archives of Belgrade, I was a member of the  Committee for Culture of the Belgrade City Borough of New Belgrade  established by the then head of the borough, Željko Ožegović. Our idea  was to turn Sajmište into a memorial park and make the necessary steps  leading to the construction of a museum. However, the support at the  level of the of city authorities was lacking and the explanation was  that there were unsolved land ownership issues. As I see it, these were  all excuses for reserving that place, on account of its being a good  location in Belgrade, for a certain group of people to whom it would  become a source of profit.

The  Constitution specifies that the state is responsible for every form of  cultural heritage, including the sites of concentration camps. People  should turn to the state, since they have the right to demand that the  state respects its constitutional obligation. The society is indeed  asking these questions now and the issue is highlighted. If this process  hadn't begun we would probably see a shopping mall  spring up there and  maybe some monument to the victims as a mere add-on.

How do you see the future of Staro sajmište? What would be the best case scenario for it?

I  believe that the only option is to build a museum. That is the  obligation of the state and something that the society has the right to,  as part of fostering the culture of remembrance. It does make a  difference whether some indifferent monument is put up there or whether  photographs of people are shown, their private possessions, whether you  really see the residents of Belgrade, young and old, women, men,  children. You will stop to think, as a person living over 60 years  later, how horrible their death was. Then, as human beings, we will be  able to connect with those who preceded us in the long chain of human  existence. Only then would they still be residents of Belgrade, if they  are mentioned one by one, by name and surname. In this way, we would  bring them back to the city where they lived, just like we do now. That  would mean bringing them back to the city where their lives were taken.  The need to mark the place is beyond dispute, that is bound to happen.  The question is only how much time will pass before such a thing becomes  possible.

The interview was conducted on  July 20th, 2010 as part of the research project "A Visit to Staro sajmište"