Documentation of the visit to the Memorial Sites of Jasenovac , Donja Gradina and Stara Gradiška, 09.06.2012

Within project Visit to Staro sajmište / Paths  on Saturday 9th June  2012 for 41 participants was organized a study visit to Memorial site Jasenovac (Croatia), Memorial site Donja Gradina (Federation of Bosnia and Herzegovina-Serb Republic) and to concentration camp in Stara Gradiška (Croatia). This study visit was organized with the goal of more complete and complex study of historical facts, but also for a better insight into the past and current policies and practices of remembering the Second World War, the Holocaust, genocide and war crimes. In addition to paying tribute to all innocent victims of these camps and acquainting with the historical facts of Jasenovac concentration camp the more complex aim of this one-day excursion was also to consider issues such as historical contexts in which certain events in history happened (in this particular case it is the ideology and movement of Ustaša regime). Speaking on context we wanted to see in this particular example in which way different interpretations of historical facts are depended on social-political context in which it occurs. The current museum exhibition at the Jasenovac Memorial Museum provided us a unique opportunity to consider important topics such as the representation of historical facts to a wider audience and educational role of museums in contemporary society.


PREPARATION FOR STUDY VISIT
In order to be appropriately informed about the facts and issues concerning the establishment, functioning and subsequent investigation of the Jasenovac camp before trip for all participants of the study visit we prepared a selection of relevant historiography literature. The links to the internet address where they could get acquainted with the basic historical factography were also forwarded to them by emails. While traveling to our destination we shared or disclosed to all participants texts or excerpts from the texts of historians Mr. Antun Miletic and Dr. Jovan Mirkovic:
1. Antun Miletić, Koncentracioni Logor Jasenovac. Ubijeni u koncentracionom Logoru Jasenovac 1941-1945. Gambit, Beograd
2. Antun Miletić, NDH-Koncentracioni Logor Jasenovac 1941-1945, Beograd 2010.
3. Jovan Mirković, Jasenovac:istorija i istoriografija. Neka otvorena pitanja o logoru Jasenovac u istoriografiji, Muzej žrtava genocida, Beograd
While driving to the destination the objectives of our study visit were introduced to participants by a brief discussion of how different political and social contexts shape our interpretation of certain historical events. Previously mentioned problems of knowledge and understanding of the context of historical events and their interpretation are reviewed on a case study of interpretation and understanding of the development of the Ustaša movement. Associate on the project and participant of study visits Milan Radanović gave a comparative analysis of the Ustaša movement page on Wikipedia in Serbian and Croatian language. Through a series of comments and observations he challenged the neutrality of both texts, but also he introduced the complex problem of interpretation of existing historical facts. Through a few examples he has shown how different historical facts can be neglect and overlook or highlighted and by this he drawn attention to the fact that understanding of the past is very often reduced to a social practice that is inevitably linked to the current political circumstances. 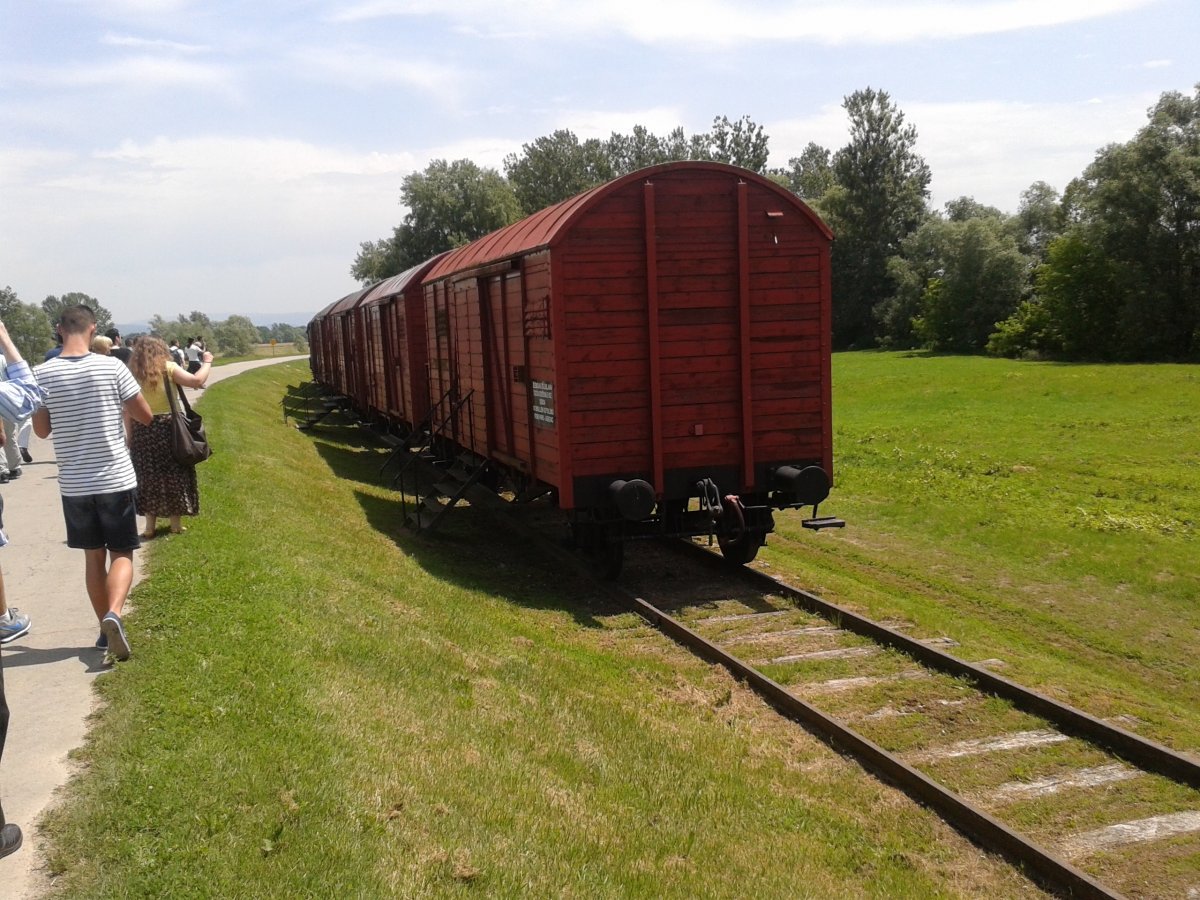 MEMORIAL SITE AND MEMORIAL MUSEUM OF JASENOVAC
Basic topography of the camp Ciglana III (the largest camp in the Jasenovac concentration camp complex) and the history of creation and functioning of the camp were introduced to participants of study visit by local expert curator Ivo Pejaković. Within this guidance he mentioned the number of victims of the Jasenovac camp who have been registered by now (80 914), but there was no further discussion on assumed number of victims, nor about a decade long debate on this issue (see below). Overview of the social-political complexity and meaning of the Stone Flower monument was made by Vladimir Kulić, architectural historian (professor at the University of Florida and the tour participant). He gave a brief lecture about this monument (the work of the architect Bogdan Bogdanović from 1966) mentioning the different perceptions and interpretations of this monument in the former Yugoslavia, and then during the last wars on Balkans. He presented the substantial change that had occurred due to the change of state ideology focus with the ideas of brotherhood and unity to nationalism. At the end, participants of study visit had the opportunity of half-hour tour to exhibition in the Jasenovac Memorial Museum. 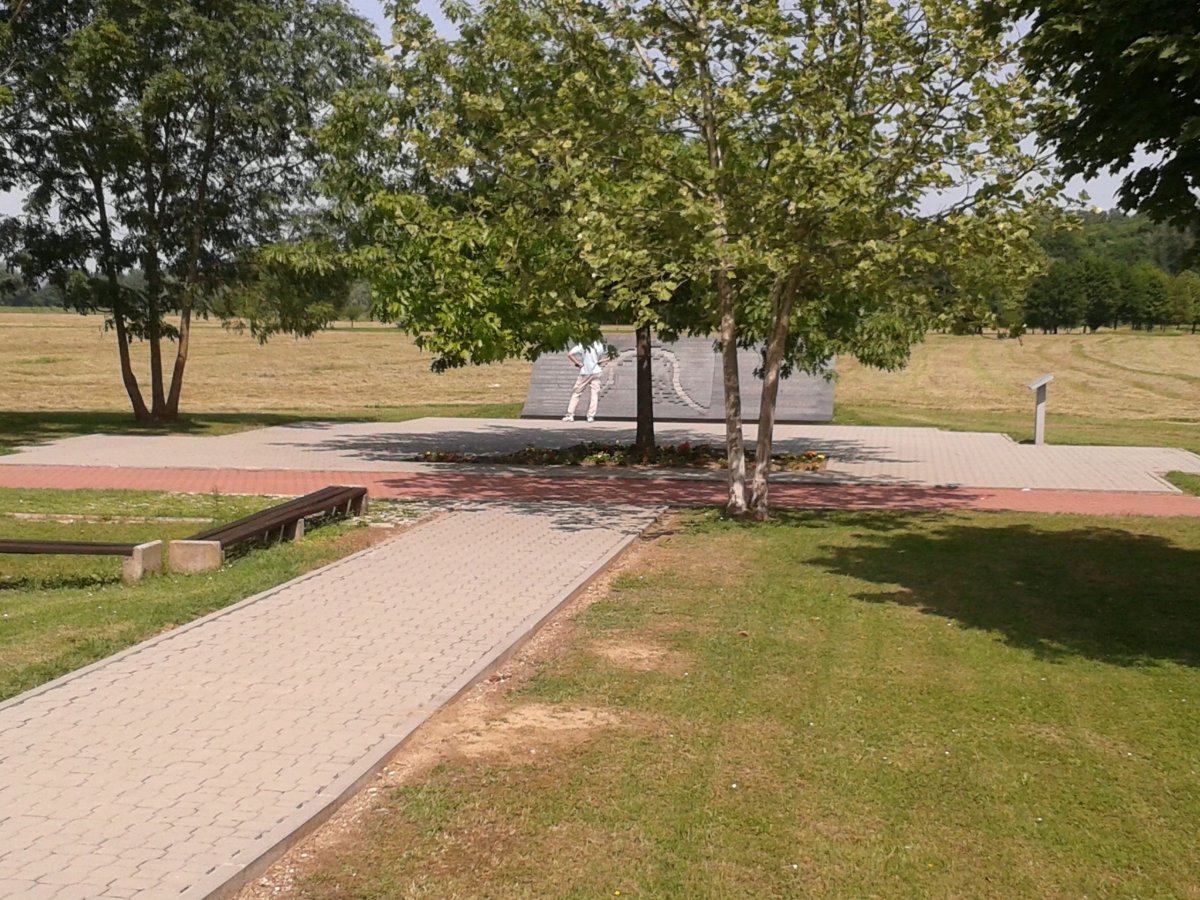 MEMORIAL SITE DONJA GRADINA
After visiting the Memorial site Jasenovac, the group continued its journey by visiting the Memorial site Donja Gradina located across the river Sava in Serb Republic (BiH). Donja Gradina is inextricably linked to Jasenovac as this was a place where prisoners of the camp were murdered. The largest number of mass graves was revealed here. (nine fields with over a hundred mass graves is discovered and it is assumed that this number is not final). Professional guide Dejan Motl presented to participants the history of massive and brutal liquidation of prisoners and detainees in the camp, and afterwards attendees discussed the problem of number of victims murdered in the camp.
This was also the opportunity for all participants to see some differences in concepts, contents and methods of mediation official policy of the memory of the two sides of the river.

CONCENTRATION CAMP IN STARA GRADIŠKA
The third location that was visited during this study tour was the concentration camp in Stara Gradiška. Visiting this location was very important as here we had the opportunity to see ruins of concentration camp facilities preserved in a very poor condition.  The concentration camp in Stara Gradiška was established by the beginning of 1942 by Ustaš regime. According to official list of victims of Memorial Site Jasenovac 12 790 people was murdered in this camp. Regarding different interpretations of the past, it is interesting to see how Stara Gradiška is presented at the official website of Memorial site Jasenovac. Most of the paper deals with the prewar and postwar history of this place (during Yugoslavia here was a prison for all political opponents of that regime) as well as its history during the wars of the nineties while fascist history of this place is presented by two short paragraphs. A similar situation is evident in the field, where the fascist past of this place is left to oblivion and the only modern intervention on this location are reduced to two memorial plaques. One plate was placed 2007 by the Croatian Association of inmates in Serbian concentration camps in Stara Gradiška and it obviously evokes a time of war during the nineties. This plaque was set up in memory of Croatian war veterans, women and children who were detained, tortured and killed in this camp in 1991. Another memorial plaque was put later (2010) and it is set by the Croatian Government to commemorate the victims of this prison and all victims "of the totalitarian" regimes. This memorial plaque was placed on the Day of Remembrance of all victims of all totalitarian and authoritarian regimes, as indicated in the inscription on the panel.

MANIPULATIONS WITH FIGURES AND NUMBERS
One of the most problematic question which arose during this study visit was the question of number of victims in concentration camp Jasenovac. Because of this, during out traveing back to Serbia the tour participant and historian at the Institute for the Protection of Cultural Monuments Nenad Lajbenšperger (currently writing PhD on the subject of political background and manipulation with number of victims in Yugoslavia during World war) gave a short lecture about problem of fluctuation of the number of victims in periods of different social-political circumstances. He gave a brief overview of this fluctuations starting from the first assessment of 500000-600000 victims of Jasenovac camp which was expressed in a specific historical moment, as a consequence of the need to emphasize losses in Yugoslavia during World War II to those shameful and quickly rejected of 2238 victims in 1991 (assesssment of Commission for determination of war and postwar victims founded by the Croatian Parliament).
This review of the fluctuations of the number of victims was a useful indicator of specific issues which carries the history of Jasenovac concentration camp and the complexity of the issues of selection, understanding, interpretation and presentation of historical factography regarding these and other death camps in Yugoslavia during World War II.
This study tour will be of significance in the conception and eventual formation of the memorial site at Staro sajmište.

AFTER THE STUDY VISIT
Participants' impressions from the study tour were deepened by sharing with them texts of young researchers who have criticized the concept and content of the exhibition in Jasenovac Memorial Museum:

With the aim of better understanding of Memorial site Jasenovac, but also past and current policies and practices of remembering the Second World War, the Holocaust, genocide and war crimes the discussion will be held. During this meeting historians Antun Miletic and Jovan Mirkovic will be present and we will have the opportunity to discuss this problems and exchange opinions with persons who were important for existence of the Jasenovac Memorial site before the disintegration of Yugoslavia.